Japanese forces invaded the Solomon Islands in January 1942 and then in August 1942 the 1st United States Marines landed in the country to launch a counter attack against the Japanese.  The islands of Guadalcanal and Tulagi were the initial sites of conflict and the country experienced several years of bitter conflict over this strategic foothold in the South Pacific.  With WW2 now well over 70-years in the past, the preservation of the relics and experiences from that time are vitally important and there are several ways you can experience this history.

The National Museum is in Honiara and is a good place to start in your quest to see WW2 relics.  There are a number of fascinating displays at the museum and is a very worthwhile trip.  The US Memorial is just a couple of minutes’ drive from Honiara on Skyline Drive and is a dedication to the allied soldiers who lost their lives during the Guadalcanal Campaign.  It’s a quick visit as the memorial isn’t huge, but it gives visitors a feeling of the commitment and sacrifice made by the service men and women at the time. Also on Skyline Drive is the Japanese War Memorial, which remembers the Japanese soldiers lost during the Solomon Islands Campaign.  The Vilu War Museum can be found in a secluded area outside Honiara and is quite a journey on rough roads to get there, however, military enthusiasts will appreciate the significance of the collection of guns, engines and planes there.

There are numerous battle sites you can visit around the country and especially around Honiara and Guadalcanal, with a lot of the wreckage and machinery left untouched after the war.  There are also caves, trenches and foxholes that were used by the Japanese as they tried to establish their presence in the country.

There are several significant dive sites that feature a variety of WW2 relics and wrecks.  The sheer number of wrecks lying underwater is staggering, with Iron Bottom Sound, a body of water north of Guadalcanal, being the final resting place for many dozens of ships, submarines and aeroplanes.  Pay a visit to White Beach where you can see an array of US equipment in the water, the I-1 Japanese Submarine site, and one of the many sunken aeroplanes around the islands. This country has so many interesting underwater relics to explore.

Call our My Solomons Holiday Experts on 1300 007 656 now to find out more about the fascinating WW2 history experiences available on your Solomon Islands holiday. 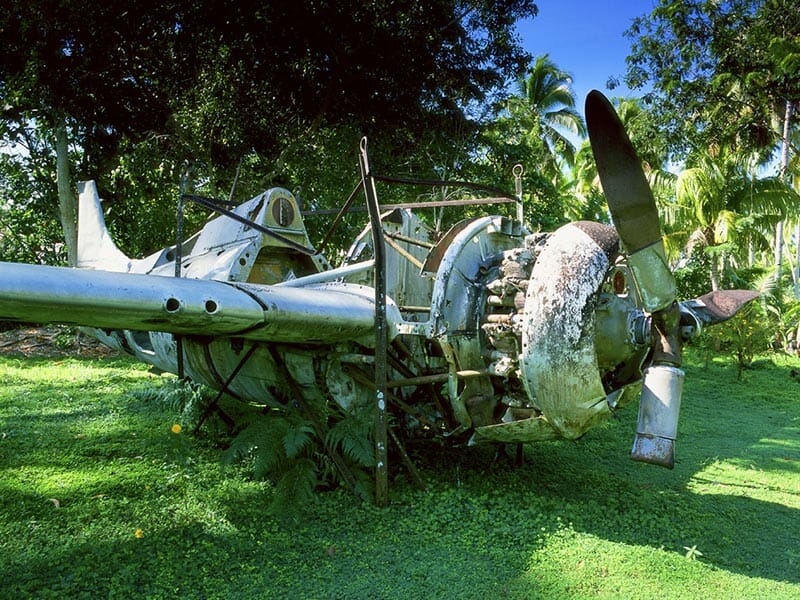